Housing Trust Group (HTG), an award-winning multifamily developer and one of the nation’s largest developers of affordable housing, held an official grand-opening for the completion of Father Marquess-Barry Apartments, a $18.5 million affordable housing community for seniors located in the historic Overtown neighborhood of Miami. Father Marquess-Barry Apartments delivers 60 one- and two-bedroom units with rents ranging from $372 to $1,200 per month for income-qualifying seniors (62 and up) who earn 40 percent and 60 percent of area median income (AMI). The property leased up rapidly and is 100 percent occupied.

The community is named after the late Reverend Canon Richard Livingston Marquess-Barry, a community leader, housing advocate and former pastor of the Historic St. Agnes Episcopal Church in Overtown who was instrumental in the property’s development. His non-profit, Rainbow Housing Corporation, granted HTG a 99-year ground sublease on County-owned land to build the apartments on a site directly next to the church. Sadly, Father Barry passed away at the age of 79 before the project was completed. His influence can be seen in the Bahamian design of the property (a tribute to his family heritage), and multiple monument signs on the building façade to honor his memory and legacy.

“Born to Bahamian immigrants and raised in Miami public housing, Father Barry was a tireless champion for better jobs, housing and opportunities for Miami’s African American community,” said HTG’s Rieger. “So it has been an honor and privilege to execute on his vision for a senior community in the heart of Overtown, and I believe he would be proud with the end-result.”

He went on to add, “The housing crisis affects seniors and people of color more than any other group. This is simply unacceptable. Now more than ever we need bold action from our local, state and federal leaders in the form of a once-in-a-generation commitment to creating new affordable housing supply.”

A partnership between HTG, Miami-Dade County, and Rainbow Housing Corporation, Father Marquess-Barry Apartments was developed in compliance with Miami-Dade County’s Responsible Wages and Benefits for Construction Contracts and HTG worked with the Miami-Dade County Arts in Public Places program to commission original artwork on the property.

Located at 301 Northwest 17th Street, Father Marquess-Barry Apartments’ community amenities include a large multipurpose club room for community and property gatherings; a state-of-the-art fitness center; a library and media center with computers; a secure package-delivery locker system within the indoor mail room; and bike racks. Units are equipped with Energy Star-rated appliances, granite countertops, and side-by-side washer and dryer units. Residents of the property also have access to free on-site programs including literacy training, assistance with light housekeeping/grocery shopping, and other community events and activities. The property is built to National Green Building Standards (NGBS). 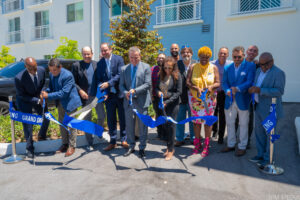 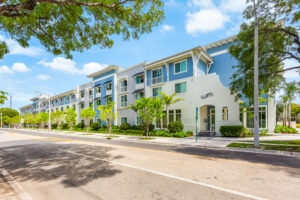