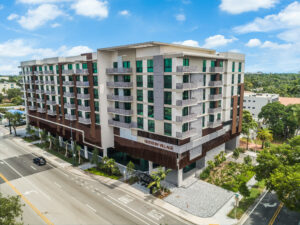 The designated affordable housing development in Broward County recently opened at 901 South Federal Highway and its 96 apartments are all leased. Monthly rents range from $401 to $1,300 for the tenants who earn salaries from 30% to 70% of Hollywood’s annual median income. The community includes a swimming pool and a yoga room.

“This development exemplifies the kind of high quality, well-designed attainable housing that residents can be proud of and that enhances our city,” Levy said in a prepared statement.

Planning for Hudson Village began in 2016 when Hollywood officials reached out to Matthew Rieger, CEO of Housing Trust. As a developer, Rieger appreciated city officials reaching out to him, since it’s usually the other way around.

Construction of the apartment complex started in 2020. It was financed with a $28 million construction loan from Chase Bank. The developer also secured a $9.75 million loan from Walker & Dunlop via Freddie Mac and $26 million in tax credits for the project from the Florida Housing Finance Corporation through Raymond James Tax Credit Equity Funds.

Rieger has worked in real estate development for decades and is well aware of the negative connotation some people connect to affordable housing communities.

“There should be zero stigma attached to living in an affordable housing development,” he said in an interview. “If we’re not building a product that allows people to take pride in where they live, then we’re setting them and setting ourselves up for failure. People had in their minds that affordable housing means individual buildings with single-burner stoves and rats and roaches going everywhere. I’m trying to get away from the idea.”

Rieger pays close attention to solutions cities and other area developers consider in trying to alleviate the severe housing-affordability crunch in Miami-Dade and Broward counties. He thinks a supply and demand problem is at the center of the crisis here and in other parts of the state. Other Florida cities like Orlando are considering measures such as home rental caps, but he is concerned about the potential consequences.

“Controlling rent stops production of new units,” the developer said. “We have a supply problem, not a demand problem. It’s the worst solution at the worst time. Allocate more resources and make the zoning process easier.”