As the housing market in South Florida boomed during the COVID-19 pandemic, the cost of housing and the gap in renters’ wages increased with it.

That means if someone works a minimum-wage job in Florida, they have to work 93 hours a week to afford the average one-bedroom rental home at fair market rent, according to the National Income Housing Coalition.

Matt Rieger, CEO of Housing Trust Group in Miami, said the need for affordable housing has greatly increased since the pandemic started, while people who made over six figures recovered quickly and the stock market went up 25%.

“People who live in affordable housing developments aren’t really invested in the stock market,” Rieger said. “Instead, they’re working paycheck to paycheck, and a great percentage of those paychecks go to paying the rent.”

Rieger said the No. 1 job for residents in his affordable housing developments is an Uber driver.

“Those are my residents,” Rieger said. “It was a really scary thing because, even if you weren’t living in affordable housing because you made a little too much money to qualify for our developments, there were a whole bunch of new people that lost their job, so now more people were eligible.”

“We just haven’t had the political will. We haven’t had the houses of Congress, and the Senate and the executive branch lined up, frankly, like we do now. It’s not enough of a margin in the Senate to get anything passed outside of reconciliation but the great hope is that, with President Biden’s agenda, the infrastructure bill is hopefully not stalled, we can get some resources necessary to make a dent in this,” Rieger said. “I don’t have a disillusioned idea that it’s going to be enough to ultimately meet the demand, but every little bit helps, and we need a lot.”

For Rieger, creating affordable housing isn’t a way to get rich. Two variables that he said affordable housing developers should consider are insurance and property taxes. Rieger said his insurance costs have gone up over 50% in the last two years, despite rent staying the same. That means developers should structure their capital in a way that they can withstand rising costs.

“We have enough cash flow from operations to pay for insurance and our mortgage, but it doesn’t leave a lot left for my owners and payroll,” Rieger said. 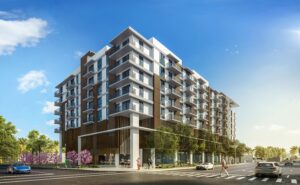 Housing Trust Group has a few developments in the works in Miami, and Rieger said the goal for all of them is to ensure there isn’t a negative stigma attached.

“We want our affordable housing developments to look equal to or superior to our market-rate competitors right next door and right across the street,” Rieger said. “The only detectable difference a resident or anyone else should find between that market rate and that HTG affordable development is they have to show us their W2 to show they make a certain amount of money or less, and no matter what the market says, I can only charge a certain amount of rent. That’s the only difference.”

Max’s Landing, an affordable apartment located in Kendall, is Housing Trust Group’s fifth development in Miami-Dade County. It’s a mixed-use building with 76 units reserved for people earning between 30% and 80% of the area’s median income.

Father Marquess-Barry Apartments, a 60-unit development for seniors — many of whom are on a fixed income — is named after Rev. Canon Richard Marquess-Barry, a former pastor of St. Agnes Episcopal Church in Overtown, who died before the deal closed.

“I assure you we are bending over backward to make that a really special place to honor that great man,” Rieger said.

The developments are expected to be finished by the end of the year. Additional developments include Courtside Apartments in Overtown, Wagner Creek in the Health District, Veranda Apartments in Homestead, and Princeton Park in the Princeton section of unincorporated Miami-Dade.