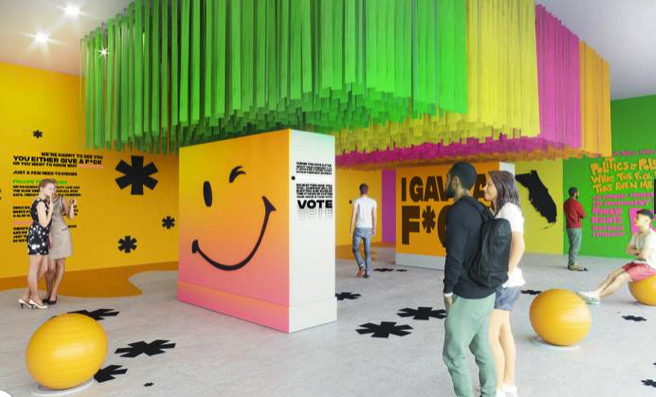 Businesses typically shy away from political and controversial messages. But five local real estate-related companies are stepping into this year’s political scene with building-sized murals, installations and billboards encouraging voting and social justice.

“I think the importance of this election outweighs any other facet,” said Gavin McKenzie, owner of McKenzie Construction. “A lot of people separate politics from a lot in their life, but, at this juncture, it is life. There is no separation.”

Some firms are promoting a nonpartisan message encouraging voting; others veer into advocacy. And while some artworks are stationed in the street-art mecca of Wynwood and culture-savvy Design District, messages spill into other neighborhoods as well.

“Being apolitical is a political choice,” said Daryl White, director of Dissolve Collective, which joined with other artists to create a voting message in the Design District. “Real estate groups realize that…In a climate that is so partisan…telling people to vote is the last neutral zone.”

The collaboration speaks to the Design District’s focus on art and design. “Freedom of artistic expression is in the Miami Design District’s DNA,” a spokesperson for Dacra said by email. “We are excited to lend our platform to this immersive installation that aims to encourage millennials and Gen Z to use their voice and vote this coming election.” 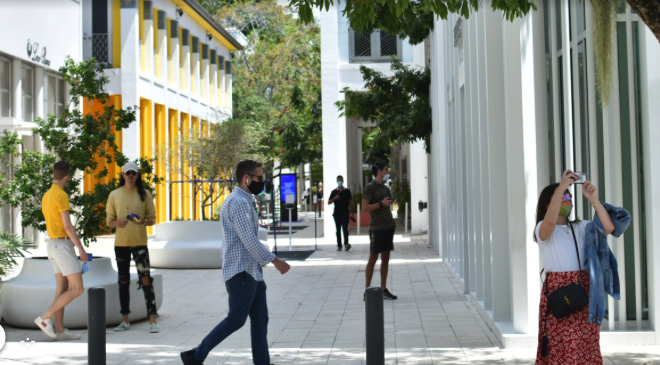 The Design District is also home to the a new double billboard by Miami artist Adler Guerrier espousing social justice, “claimed for living, for love and trouble,” supporting racial justice. Commissioned by For Freedoms and the Design District, it was installed on the side of the Moore Building on Northeast Second Avenue earlier this fall.

In the view of muralist Daniel Fila — better known by his street tag of Krave — Miami real estate concerns have a greater appreciation for artistic expression than other locales, such as California or even nearby Fort Lauderdale.

“We are in a city where people know that art has to be free. The real estate developers and owners are human beings and, more than money, they know this is a humanistic problem and they want to do something,” Fila said.

At the Miami Flagler Common project in downtown Miami, Fila’s “Vote 2020” mural was underwritten by affordable developer Housing Trust Group. It will adorn 100 E. Flagler St. for the next 12 months, until the building is gutted for renovation.

“When [Daniel Fila] showed us his ‘Vote 2020’ concept, we loved it,” said Matthew Rieger, president and CEO of HTG, by email. “It sends a very positive message around the importance of civic engagement, regardless of where you fall on the political spectrum.

“If you want a better Miami, with more affordable housing or whatever it is that matters most to you — you need to vote. This is a message that’s easy to say, regardless of your political affiliation, and I think anyone can get behind it,” Rieger said.

The building is part of a broad downtown redevelopment plan from Moishe Mana, who has long combined art with real estate. Mana also underwrote Fila to create “Liberty Assassin” at nearby 19 Flagler St. showing a man donning a red cap and shooting at a bald eagle.

“Only in the current climate would a subject like voting be considered partisan,” said Mana’s chief of staff, Theodore Ward, by email. “We see it as an inalienable right…We’re not concerned with how encouraging Americans to vote impacts the bottom line.”

Some messages are more pointed.

“The hope was that it would be a conversation starter for some of the challenges that we are seeing in the current political climate,” McKenzie said. “I thought it was a powerful piece of art and the message was not too subtle but not too overt either.”

The power of art is most readily apparent in Wynwood, home to the outdoor museum Wynwood Walls. It was street art, commissioned by the late developer Tony Goldman, that spurred the transformation of the former warehouse district into a highly sought urban enclave.

“Art has the ability to create a sense of community, to creatively differentiate a building, a project or a product. It shows what a company believes in and supports,’’ said Jessica Goldman Srebnick, CEO of Goldman Properties and co-founder of Goldman Global Arts. “In the case of a neighborhood, it can create tourism, new business, enhance values, increase employment and a desire to invest in development as people are drawn to unique places.”

For Sterling Bay, developer of Wynwood office building 545wyn, adding art to its facade helps it integrate into the neighborhood. His firm is working with Goldman Global Arts to create murals including two by Miami-based artist Mojo — part of the digital mural voting campaign by Michelle Obama’s #WhenWeAllVote initiative — depicting the quest for freedom. They will be produced in mid-November, in time for December’s art festivities.

“When you enter a market like Wynwood,” said Matt Menna, Sterling Bay principal and chief design officer, “your first goal is to fit in. We wanted to be respectful to everything that was built before us. We owed it to the community to try to add value to the community. I think people like that honest approach.”