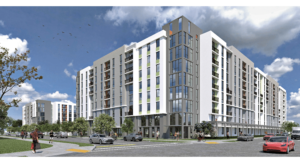 The Miami-based developer filed a pre-application with county officials for Naranja Grand on the 5.3-acre site at the southwest corner of Southwest 280th Street/Waldin Drive and Southwest 147th Avenue. The property, which is currently vacant, is three blocks east of U.S. 1/South Dixie Highway.

HTG would develop the project in partnership with the current owner of the property, Miami Lakes-based Elite Equity Development, managed by Roosevelt and Nicole Bradley.

Totaling 263,446 square feet in buildings of seven and eight stories, Naranja Grand would have 320 apartments and 495 parking spaces. Each building would have a pool and there would also be a dog park.

HTG said all of the units would be affordable or workforce housing. The developer is seeking low-income housing tax credits for the project and hopes to break ground in in the next 12 months.