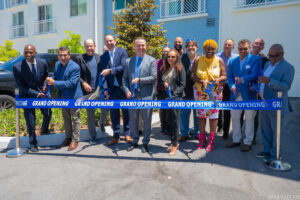 Historically Black Overtown is now home to Father Marquess-Barry Apartments, a community designed to provide senior citizens with affordable housing in a Miami neighborhood where residents are caught between a history of less expensive homes and recent development of luxury condominiums.

Marquess-Barry presided over the historic St. Agnes Episcopal Church next to where the apartments were built. He also was a local community leader and housing advocate who worked a great deal to push the apartment project. Rainbow Housing Corp., Marquess-Barry’s nonprofit organization, provided Housing Trust Group with a 99-year ground sublease on county-owned land to build the apartments next to the church.

Another key player in Overtown’s rich history was the late Dana Albert Dorsey, a Georgia transplant who was Miami’s first African-American millionaire. Dorsey, who died 80 years ago, was known for his philanthropic work in the neighborhood and providing the community’s residents with places to live.

With the Marquess-Barry homes, Housing Trust CEO Matthew Rieger hopes to continue that work. Ultimately, he sees his company’s latest affordable housing community as one part of a much longer effort.

“The problem is, even if we have significant action

and devote significant resources, we’re still years away from allocating those funds, from getting design documents done, getting through the permit process and then getting through the construction process,” Rieger said at Tuesday’s unveiling of the apartment building at 301 NW 17th St.

Cuban immigrant Tania Davis, 63, a longtime Overtown resident, is one of the first tenants at the Marquess-Barry apartments. A tall Black woman wearing bright shades of pink, she was emphatic when talking about how much her new apartment means to her.

“At one of my lowest points, I remember driving by and wishing and praying for a new opportunity,” she said. “I’m eternally grateful. The building is beautiful. This is really the dream.”

Rieger thinks private-public partnerships like the one between Rainbow Housing Corp. and his company are essential to building new homes that are affordable for residents in Miami, a city with minimal land to build on and skyrocketing housing costs.

The city and Miami-Dade County are in the midst of a vexing housing-affordability crisis, one in which many working residents can’t afford to buy or rent homes. Rieger said the federal government should be held accountable for the lack of funding for local governments to build new homes.

Coincidentally, Marcia Fudge, U.S. secretary of Housing and Urban Development, was in Miami on Tuesday visiting Miami-Dade County’s Liberty Square complex in Liberty City, one of the nation’s first public housing projects when it was originally built in 1937.

Once the $300 million redevelopment of the community that began in 2015 is completed in 2026, there will be 1,455 apartments along with complementary buildings for educational, community and business uses.

Fudge called Miami the “epicenter” of the nation’s housing crisis. The Marquess-Barry apartments should help.

The property is fully leased and occupied.